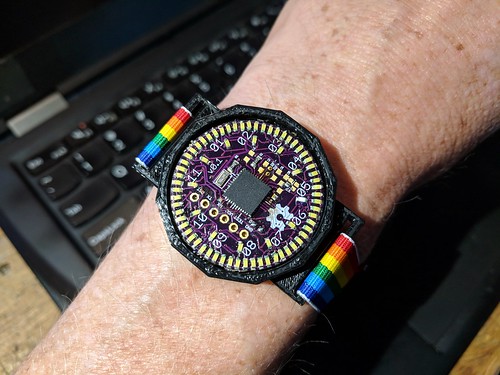 The Charliewatch is an "analog" version of Travis Goodspeed's MSP430 based "Goodwatch" with 72 charlieplexed LEDs. It's open hardware with programmable firmware and some fun animations at various times during the day. Read on for more details...

After enjoying the inPulse watches, I was very excited to have early access to the newer Pebble wrist watch. I wrote several watches and also taught a class on Pebble programming. Read on to see the watches I've written...

I taught a class on programming the Pebble smart watch at NYC Resistor and then hosted a hackathon afterwards. We used the excellent Cloud Pebble service for building our programs, which allowed the students to get up to speed very quickly. Representatives from Pebble showed up to distribute swag.

I taught a class in assembling and programming the Adafruit TIMESQUARE LED watch. Class announcement 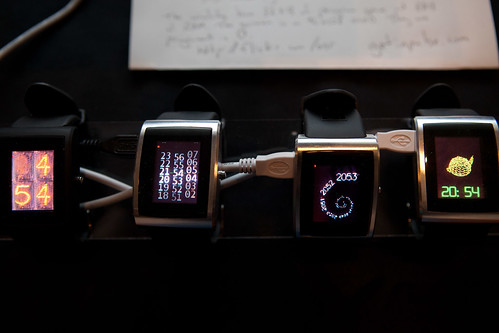 As an artistic challenge I tried to write a new watch face every day for the inPulse programmable wrist watch. One day even included a full wireframe 3D rendering library, others included squeezing compressed data into the limited flash memory. It was difficult to do a new creative design every day, but I made it through the month and was able to exhibit them at the 2011 Interactive Show. Read on for all the watch faces.... 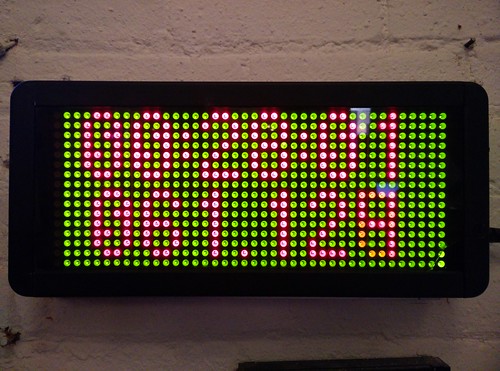 I modified this random red/green LED scrolling sign to use a SparkCore as a brain. It now tells the time in UTC and .beats. Read on for more details

There was an old AMD1026 one-line (90x7) LED sign hanging around NYCR that was not doing anything and required RS485 to interface with. I felt that it needed a more modern controller and an Internet interface, so I re-brained it with a SparkCore and put it online. Read on for more details...

I've converted the SolderTime Desk Clock to use a SparkCore in place of the ATMega328. This gives it network time sync and the ability to set the alarm via WiFi. Still a work in progress, but mostly functional. Read on for more details and code... 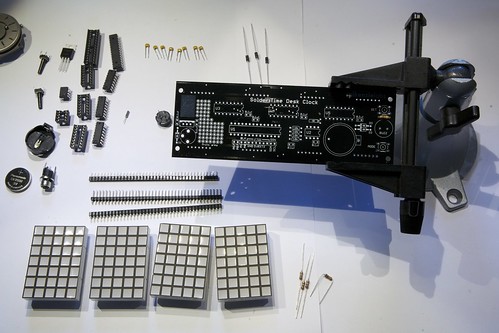 We had three workshops on building the Spinkenzie Labs Solder:Time Desk Clock at my office and made a timelapse of the construction process. Read on for more info on programming the clock with custom firmware...

I wanted an extra large clock that couldn't be missed, so I laser cut a giant four digit seven segment display and populated it with 112 red LEDs. Holly helped with the repetitive soldering. Souce code is available and the design is thing:33786.

Using my vector display driver board I like to turn analog oscilloscopes into clocks. It's a pretty common way to reuse old CRTs that makes for a very nice, if not very efficient, timepiece. Modern digital oscilloscopes don't work as well, unfortunately.

I found these HDSP211x alphanumeric displays in the LED bin at NYCR and loved the StarTAC style. Once I had the pinout deduced, I noticed that the pin spacing exactly matched the Teensy 2 and decided to make it into a "backpack" design. Read on for more details...

My AlphaClock Five from EVMSL now sits on my desk at work telling the seconds since midnight in hex, but along the way I re-wrote the firmware to include PWM on individual digits and reworked the font handling code to be more readable.

The following 17 pages are in this category, out of 17 total.