These are some of my favorite hacks that I've done. See Category:Hacks for a more complete list.

Rather than let an old Mac SE with dead drives go to waste, I built a video card interface to the BeagleBone Black to drive the 512x342x1 display using the PRU. The bit clock is 16 MHz, about 64ns per bit, which is easily doable with programmable realtime unit, but not from userspace due to the hard realtime constraints -- a few nanosecond delay in generating the video signal causes visible distortion. The source is github.com/osresearch/classicmac and reuses the PRU interface from LEDscape / Octoscroller. See it in action! Or read on for more info...

One of my more fun projects was developing the r2r hardware and software library to turn oscilloscopes into XY displays. I really like the look of the vector monitor lines and hope to redo this with analog line drawing hardware sometime. I've since written Space Rocks, an Asteroids inspired game, and made a Twitter oscilloscope with the hardware and software. Read on for details about how vector displays work...

For the 2013 Interactive Show several of us at NYC Resistor collaborated on a multi-player game that repurposed a teletype, a video editing console, a toy piano, a patch panel and a rotary telephone into Star Trek meets the TARDIS game of shouting at each other. Read on for more details...

I've developed an RFID firmware for the Atmel AVR ATtiny85 that can respond as a HID PROX card. The state machine firmware requires careful hand-sequenced assembly code to fit the necessary instructions into the tight timing requirements of a 125 KHz RFID. Read on for more details... 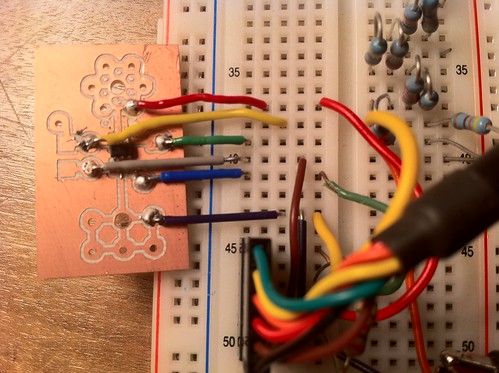 The Tiny series of microcontrollers from Atmel are incredible, and the microscopic ATtiny10 is a neat addition to the product line. I've figured out how to program it with a FTDI cable using the DTR/CTS pins for additional signalling and wrote these instructions (that might be outdated now). Read on for all the details

Digital calipers have an SPI like data signal that reports the current position. It's pretty easy to tap, with the caveat that the voltages are too low to trigger a +5V Teensy. Instead I enabled pull-ups on the data lines, which seem to back drive the MCU in the calipers and it seems to work without a battery installed.

I’m tired of my keys always jangling in my pocket, so I built a key-multi-tool out of a Crank Brother’s M5 bicycle tool. While I had the tool disassembled, I rearranged it so that the M3, M4 and #2 phillips were on the same side, which leaves room for five keys on the other side. A quick grind with the Dremel and buff with a polishing wheel leaves the keys smooth and compact in my pocket. If you have more keys than will fit on the M5, you can either try to make longer axle pieces or start with a larger tool like the M10.

Pat and I restored a two group Astoria espresso machine that we purchased from a restaurant closing sale. It has reliably made a few hundred drinks per week at our office since then, but required an extensive overhaul to make it work well.